The annual Orchids and Onions competition is back for its 43rd year with examples of great architecture, and a few duds

By PHILLIP MOLNAR
It was time to duck and cover Thursday night for architects in San Diego.

San Diego County’s annual Orchids and Onions competition awards the best in local architecture with an Orchid — and the worst with an Onion. Only five Onions were given this year, so most architects avoided the notorious distinction during the awards ceremony Thursday.

The competition is now in its 43rd year, with the goal to make the region a better place to live. It was started by the local American Institute of Architects, but has been handled by the San Diego Architectural Foundation since 2006.

The top prize, called a Grand Orchid, was given to the Palomar College Maintenance Operations Complex . For the first time this year, the award is named for developer Ed Malone and his wife Barbara. Last year, judges said no single project was good enough to receive the Grand Orchid. 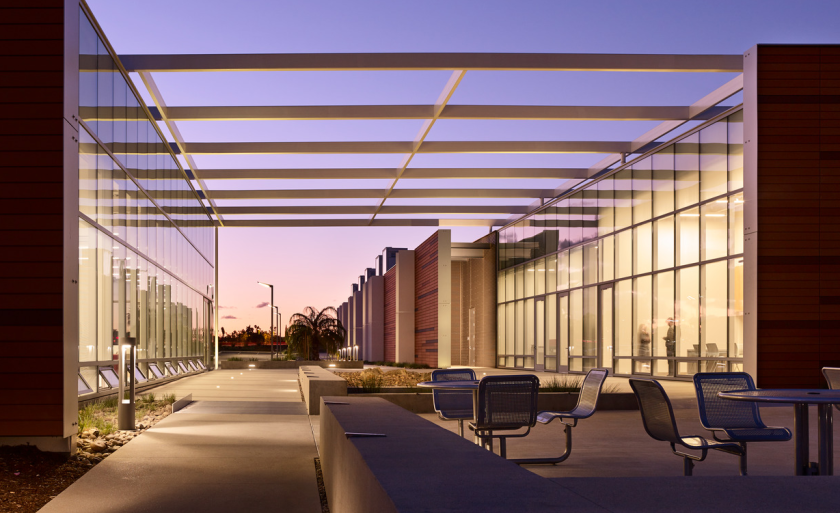 Judges’ comments: “It had remarkable attention to detail where every joint — from the sidewalk, to the window fins, to the metal panels — all lined up perfectly.”

Judges’ comments: “The architect succeeded on multiple levels; the building is highly functional, there are playful elements, including the constellation mapping and the porthole windows, and the color palette of the building blends seamlessly with the surrounding desert environment.”

Judges’ comments: “The jury overwhelmingly agreed that C3 Bancorp’s new headquarters looked nothing like any bank that they had ever been to. It’s sleek and modern with the exposed concrete structure. However, the wood accents and operable glass windows provide warmth and a hint of the salty, ocean air, giving the space a “beachy and coastal” vibe.” For landscape architecture, the jury said they liked the “thoughtfully designed drought tolerant landscaping to the clever bamboo grove at the center of the building.”

Judges’ comments: “They wanted to honor both the building and James Hubbell because they felt both he and the building were an important part of the identity of San Diego.”

Judges’ comments: Jurors praised the design for the 100-foot-long bridge over the skate park, which provides both public access to the recreation center and a stellar place to view the skateboard aerials below. “This is to skate parks what Torrey Pines is to golf courses.”

Judges’ comments: Unlike some other buildings in the East Village, Block D is “not doing too many things. It’s really refined. The moves they’re making are just really well done, really well executed.”

Judges’ comments: The jury agreed that Miller Hull’s new Point Loma office was a resounding success. One juror described the office as a “calming space with a simple design that highlights the beautiful shell of the building and the Bay just beyond the windows.”

Judges’ comments: The public art installation, Climate Clocks, was praised for its climate change message. “Art is about an important issue that needs to be talked about. It is relevant and driving (a) tough conversation,” one juror said. “This is what art should do.” For the building, jurors said “Its arts and crafts meets Mission style gone terribly awry. From faux rocks to the inhospitable chain-link fence separating the library from the adjacent school, the jury felt the project was a huge missed opportunity to connect with the community.” (The last time a project got an Orchid and an Onion was in 2008 with the Landsailers art pieces in Pacific Beach and La Jolla.)

Judges’ comments: “Morning Glory wowed the jurors with its’ playful palette of cotton candy pink, mint green, warm wood and shiny copper. Located on the second floor overlooking Piazza della Famiglia and India Street, the jury was most impressed by the automated window awning design, that is both elegant and functional.”

Judges’ comments: The jury was dismayed by the Millennium, which one juror described as “yet another stucco box with balconies.” They lamented that the uninspired building in Mission Valley is “grossly out of scale, lacks articulation and will soon be outdated.”

Judges’ comments: “The jury was wowed by CH Projects’ most recent masterpiece, a boutique liquor store with a hidden cocktail bar in the middle of UTC mall. Raised by Wolves made the jury feel as if they had traveled back in time to early 20th Century Paris.”

Judges’ comments: “Sad is the best way to describe the steep, sloping hill of tiny landscaped plants behind the historic Truax House. In fact, the sparse vegetation and lack of color only succeeds in highlighting the horrible cinder block retaining wall above.”

Judges’ comments: The jury agreed that Shift Apartments was an architectural miss. They cited the building’s lack of cohesiveness. “The building is so awkward, it’s just a mess; none of it holds together,” one juror said. An online voter said “how about searching for another color palette that lends itself to the setting, locale, shape and form of the building? How about searching for another form altogether?” (The last time a project got two onions was 2009 with the Vantage Pointe apartments downtown.)

Judges’ comments: “This place has a comfortable ambient vibe to it all. The lights, the structure. It all feels so inviting.”