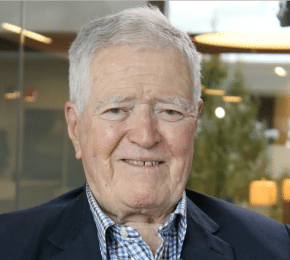 In a career spanning nearly six decades, Ken Sletten has witnessed significant changes within the construction industry. His colleagues even credit him with driving some of the paradigm shifts. Among these are fast-track scheduling and guaranteed-maximum-price contracts. Both have become industry norms.

“He created the negotiated type of work,” says Dennis Giles, president of Level 10 Construction, who has worked with Sletten for more than 30 years. “Instead of hard-bidding a job and being at odds with an owner, he said, ‘Let’s get on the owner’s side of the table and be his agent.'”

In 1956, after he earned a master’s of business administration from Stanford’s Graduate School of Business, Sletten became a project engineer for a mid-size contractor, Williams and Burrows. During one of his first projects, the 221-unit Sequoias retirement community in Portola Valley, Sletten realized the importance of scheduling when “three of the subcontractors went broke,” he says.

As a result, Sletten says he had to devise a method to rescue the project. “I invented a two-week rolling schedule to manage that job, and in particular the subcontractors who were broke,” he says. Sletten also attacked costly and time-consuming punch-list work by insisting that jobs be done right the first time. He would later present this to potential clients as a “zero punch list” approach.

In 1961, Sletten co-founded Rudolph and Sletten General Contractors with Onslow Rudolph—another Williams and Burrows veteran. Rudolph’s garage doubled as an office for the duo.

At the time, the technology industry—soon to become known as Silicon Valley—was about to explode with growth. Rudolph and Sletten realized that construction would have to quicken its pace to keep up with an industry where products—and the plants that produce them—become obsolete in just a couple of years.

“We basically had to pick up a year on the construction schedule or [our clients] would be behind their own invention schedule,” Sletten says.

“It was really obvious that the way people were building buildings at that time, it couldn’t happen,” he says. “So we started doing things like fast-track construction.”

Sletten began guaranteeing prices and using critical path method for scheduling to help ensure construction milestones could be met. Key to this was tying the schedule to each subcontractor’s contract.

Rudolph and Sletten was soon overflowing with work. The contractor built the first chip-plating facilities, clean rooms and corporate campuses for Silicon Valley firms such as Fairchild Semiconductor, Memorex, AMD, Intel, Hewlett-Packard, Sylvania and Xerox. Many of the firms became repeat customers due to the contractor’s penchant for meeting challenging schedules, solving difficult problems and building things right the first time, Giles says.

In 2005, Rudolph and Sletten was purchased by Tutor Perini, and Sletten entered into a brief retirement. But in 2011, he rejoined many of his former colleagues, including Giles, who had left Rudolph and Sletten that year to form Level 10 Construction. Sletten, now in his 80s, serves as the managing director for Level 10’s advisory board.

Level 10 has grown exponentially each year and has $600 million in annual revenue. Giles credits the success to using Sletten’s time-tested principles.

“My business plan is to duplicate what Ken did at the original Rudolph and Sletten,” he says. “Everything about it was the right way to run a business.”