Mapping the 20 high-rises under construction in San Francisco right now! 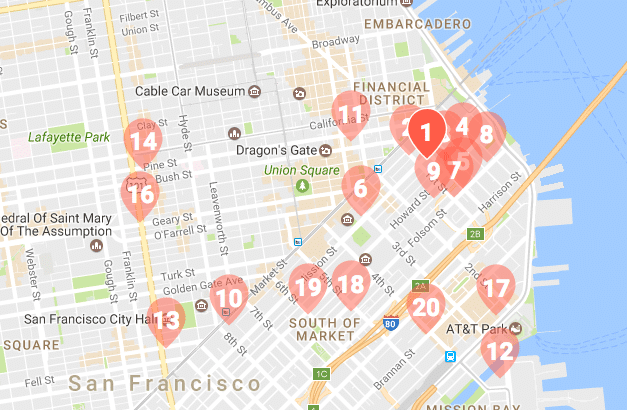 San Francisco’s dense skyline is growing again in 2017, as the city anticipates the completion of some towers long under construction and the emerging profile of others underway. From the Salesforce Tower and 181 Fremont in Yerba Buena to Exchange Place on the edge of Chinatown and the future home of Pinterest at 505 Brannan, the new crop of high-rises promises to be fruitful this year.

To make the cut, a building must be eight or more stories when completed. Towers must have broken ground already or be on the verge of doing so within the next few months. Map points are listed here by building height, from tallest to shortest—or more precisely, from what will soon be the tallest and the shortest.

A building like this is like the big Christmas present you couldn’t wait to unwrap as a kid. Though observers have envisioned the final 61-story obelisk countless times, only in the past few months, after it finally broke the record and officially became the city’s tallest building last year, has the enormity of its scale become apparent. Workers poured the concrete for the top floor in January.

On the other hand, San Francisco’s future second-tallest building, its glassy crown to one day crest 905 feet, only just broke ground a few months ago. A product of American and Chinese development and British design by way of Lord Norman Foster makes it decidedly the city’s most diverse new addition.

Though overshadowed (literally, at certain times of the day) by taller nearby projects, this 70-story high-rise may rise to prominence beyond its mere height as the classiest and most iconic looking of this generation of new buildings. The ultra luxury condos inside now under construction (beginning in the low $3 million) will be completed this year.