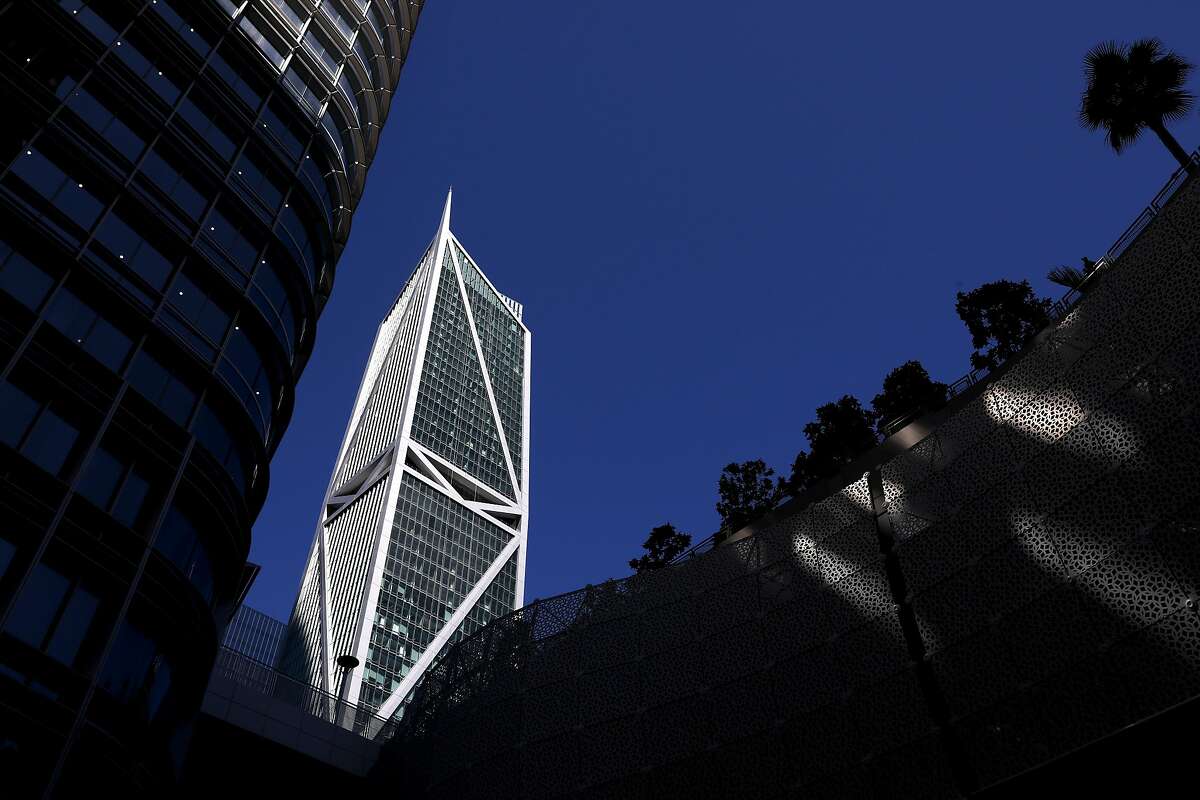 It’s a sign of today’s San Francisco that an ambitious, oddly angled tower has stirred little controversy — even though it jabs 802 feet into the air.

But that’s the case with 181 Fremont St. as it slices upward in the figurative shadow of Salesforce Tower, which rises to 1,070 feet less than a block away. Four other towers are climbing nearby, making 181 Fremont seem like part of a thicket rather than the architectural lightning rod suggested by the diagonal beams that culminate in a 50-foot spiked spire at one corner.

We’ve reached a state of affairs south of Market Street, in other words, where height alone no longer causes a stir. The issue becomes how well or how poorly an individual tower fits within the larger scene. And 181 Fremont, with the troublesome exception of an ill-treated public plaza, is happily nimble despite its size.

The tower’s main claim to fame is that Facebook will occupy all 432,000 square feet of office space within the bottom floors of the 54-story structure. From the 39th floor to the summit are condominiums that start at $3.2 million.

Another sign of today’s S.F.: tall and ultra-luxe, with a dollop of tech thrown in.

The design is by Heller Manus, a local firm with a decidedly mixed track record. Here, though, co-founder Jeffrey Heller aimed high in a brash marriage of structure and form.

The drama begins at the base, where immense beams fan out from both corners along Fremont Street. The parts could have come from the world’s largest Tinkertoy set, determined strokes that lock into a horizontal truss of similar girth at the 20th floor, then angle back and continue their climb.

It’s a structural approach known as an exoskeleton. The diagonal beams are like a scaffold that holds in place the condominiums and offices and elevator stacks within.

All this makes for steady upward motion, accented by how the upper third of the tower, which holds the condos, narrows to an average of less than 9,300 square feet per floor. Meanwhile, Salesforce Tower’s upper floors average roughly 20,000 square feet each.

No wonder that 181 Fremont, in context, seems almost frisky.

The unusual construction methods shape the tower in other ways. For instance, the tower has a partly open double-height space 500 feet or so in the air. There’s nothing like it on the skyline — and the reason isn’t just to provide a glass-walled amenity terrace but also to dissipate winds and reduce aerodynamic tension on the shaft.

A shaft, rest assured, that is locked into bedrock 265 feet below the sidewalk.

What’s missing at 181 Fremont are the well-integrated design details that give Salesforce Tower its air of subdued elegance, whatever you think of its dimensions. There’s an odd mix of swashbuckling big moves and fussy small ones, such as the sawtooth windows that seem to bristle within 181 Fremont’s structural cage. Or the sleek aluminum that cloaks the exoskeleton — instead of emphasizing the drama, it wants to be suave.

The upside is that there’s nothing formulaic, unlike some of the glassy neighbors. And the immensity on the ground is lightened by unexpected touches. The small triangular vent extending from a nook above the base is one example. The LED lighting within the screens that mask a mechanical floor is another.

The new tower looks particularly good from nearby at street level amid the fast-changing surroundings. Down Natoma Street from the west, it’s a futuristic counterpart to the masonry of New Montgomery Street. And the sleek vertical lines are a counterpart to the horizontal undulations of the soon-to-open transit center next door.

The one real jarring note comes when you leave the sidewalk and enter the passage between 181 Fremont and the brick building that holds Town Hall restaurant.

The passage leads into a public plaza in front of 27-story 199 Fremont St. that dates back nearly 20 years and was a collaboration of artist Paul Kos and poet Robert Hass. The former conceived what he called “an alpine garden in the midst of a busy city,” complete with a 17-foot-tall granite boulder. Hass wrote a poem, “Daisylaps,” crafted to fit a Kos-designed stucco wall behind a line of birch trees.

The boulder remains but the stucco wall is gone — there’s now a view of Facebook’s lobby. Also missing is a moss-shrouded copper basin, which had two faucets that released lone drops of water. “Daisylaps” is replicated in a line of engraved pavers, easy to miss.

The redo had the blessing of 199 Fremont’s owners, who worked out a deal with 181 Fremont developer Jay Paul Co. to allow access to the tight site during construction. Marta Fry Landscape Architects did its best to, in the words of principal James Munden, “maintain the rich history while allowing for the area to be more accessible and versatile.”

Perhaps. But a space that cast a quietly mystifying spell is now just a good public plaza with a really big rock.

The harm done to the original plaza hints at a larger challenge in San Francisco and the Bay Area. There’s room for growth and change, especially with new buildings as confident and ambitious as 181 Fremont. But the existing flavors of where we live deserve respect, or we’ll blur the quirks that make the region distinct.

Overall, 181 Fremont is a welcome addition to its setting, and to the skyline. If the developers can find a way to revive a bit of Kos and Hass’ lost magic — at least a display showing how the “Daisylaps” wall once looked — the result will be better still.