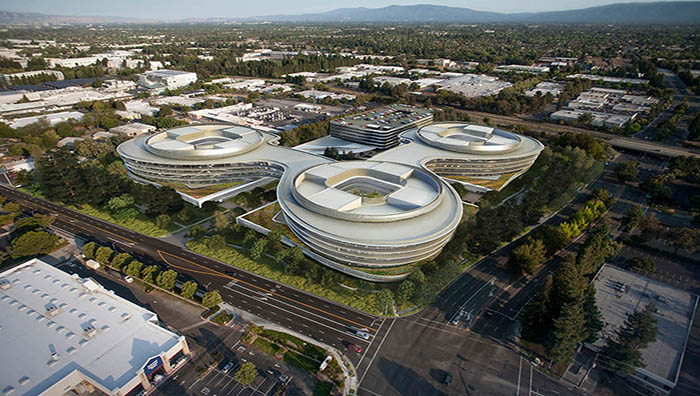 While Apple puts the finishing touches on its ‘spaceship’ campus, a lesser-known location is nearing completion.

The Cupertino company’s ‘AC3’ Central & Wolfe sits across the street from the Sunnyvale Crossing seven-building development Apple currently leases, and is just three miles away from Apple Park.

The AC3 campus boasts similarities of the main campus, such as curved windows and lush vegetation, but is shaped to look like Apple’s ‘command key’ – and the tech giant will start moving in sometime in 2018.

Footage of the massive structure highlights small parks on the campus, walking paths and wide open spaces – and the building is fitted with the same curved window design as Apple Park.

An Apple spokesperson told DailyMail.com in an email that the campus will be home to a ‘wellness center, fitness center, a Caffè Macs, amazing landscaping and green space’.

‘We expect to start moving in in 2018,’ the spokesperson said.

Apple signed a lease for the campus in 2015 with Landbank Investment LCC, Apple Insider reported, it was then purchased by developer Jay Paul not too long after.

The entire campus, when completed, will provide 882,857 square feet of collaborative space and will consist of three curved concrete structures that connect around a courtyard – forming the shape of Apple’s command key.

On the southeastern side of the campus, Level 10, the construction company involved with the project, is constructing an amenities building in a seven-story parking structure.

According to Apple Insider, parking will be mostly underground and the courtyard will host food trucks and some visitor parking.

Prior to Apple claiming the location, Level 10 had planned to cover the roofs with lush vegetation, but the video appears to show the plans have changed.

But the surrounding ground will be landscaped with local flora and other plants – following after Apple Park, which is boasts grassy fields and over 9,000 native and drought-resistant trees.