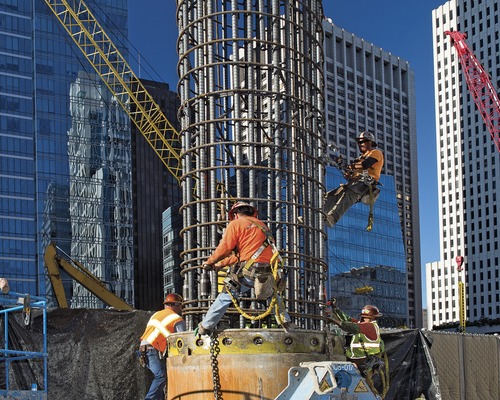 In earthquake-prone San Francisco, crews are digging the city’s deepest foundation piles for an 802-ft-tall office-residential tower that is on course to be the city’s second-tallest structure, if only temporarily. The 55-story 181 Fremont tower, sited on land reclaimed from the San Francisco Bay after the 1906 earthquake, will be founded on 42 piers that plunge an average of 255 ft—with the deepest down 264 ft—to bedrock.

Because of the tight site, which is less than 140 ft square and bordered by other large construction sites and a preschool, crews can construct only one drilled shaft at a time. Each takes three days. “It’s a tiny footprint,” says John Morgan, project manager with subcontractor Malcolm Drilling. “When we bring the cages in at 70-ft lengths, they take up over half the jobsite, laid on the ground. But we know how to shuffle the pieces on the game board to make them fit.” On a roomier jobsite, crews could work on multiple shafts at once, Morgan adds.

Workers are sinking some 100 ft of metal casing into the lower clay layer to prevent the top soil from collapsing. They then dig out the rest of the hole using a viscous polymer slurry to create a pressure plug that prevents groundwater and soil from causing a collapse, says Chris Wilcox, senior superintendent with general contractor Level 10 Construction.

After the holes are cleaned, several rebar cages are connected and lowered; then, self-consolidating concrete mix is placed via tremie pipe. The piers are socketed into bedrock 10 ft to 30 ft down.

The structural design calls for the foundation piles to reach bedrock to support a steel megaframe exoskeleton, which collects loads from a perimeter moment frame up to floor 36 and above that from a braced-frame core. The exoskeleton will include corner mega-columns, built up from 65-ksi steel plate.

Diagonal megabraces linking the megacolumns will perform in two ways. “The primary brace takes all the elastic loads from wind or seismic, but it also has a buckling-restrained-brace fuse in it,” says Jason Krolicki, associate principal of Arup, the project’s structural engineer. The scheme is currently under peer review, he adds.

The maximum compression loading to the 5- to 6-ft-dia piles under MCE-level forces is 13,560 kips, while maximum tension is 5,509 kips, says Steve DeWees, Level 10’s project executive.

The exoskeleton scheme results in a lighter building than a more conventional structural system. “We were able to reduce the total volume of steel that has to be invested into a tower like this,” Krolicki says.

Work on the piles began in February, and, to date, there are 32 complete. Once all the piles are complete in mid-July, crews will begin a 60-ft excavation for the basement levels. The project will start going vertical as anticipated in November, DeWees says.

Scheduled for a mid-2016 completion, 181 Fremont will be nearby the future 1,070-ft-tall Transbay Tower. Work has already begun on Transbay’s own complicated foundation system.