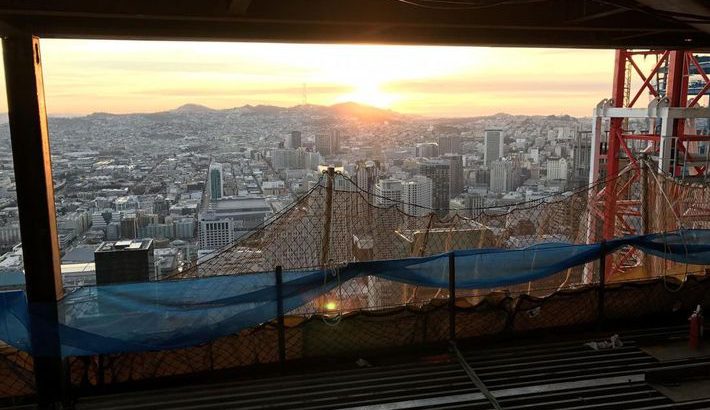 181 Fremont is one step closer to delivery. Jay Paul Co just topped off the building last Friday, completing the structural phase of the $665M building. The 70-story 181 Fremont now stands over 800 feet and is the tallest mixed-use building West of the Mississippi. 181 Fremont is also breaking records for sustainability and resiliency.

Jay Paul Co CIO Matt Lituchy (above right with The Mark Co president and founding partner Alan Mark in front of what will become the office lobby) said several condos are under contract, many of which are selling for one of the highest prices per square foot he’s ever seen in San Francisco.

Prices for residences start around $3M for two bedrooms and $6M for three bedrooms. The condos aren’t scheduled for completion for another year. Lituchy didn’t have any pre-leasing office activity to report, but several potential tenants have expressed interest.

He said the building goes into 260 feet of bedrock and can react to significant wind and seismic movement without incident. The building hasn’t sunk or even settled an inch so far. Arup recently awarded the building with a REDi Gold rating because of its seismic construction and its ability to withstand a 475-year seismic event with minimum disruption.

Among the building’s most unique features are the world’s first evacuation elevators. Lituchy said there will be signs that say not to use the stairs and to use the elevators instead. He said the idea came up because of issues related to stairways after 9/11. The building is equipped with generators that can power the elevators during an emergency. The elevators will transport people out of the building faster than a stairwell.

The building will offer 55 condos, including a 7k SF penthouse (under construction above) and 12 accessory suites spanning the top 17 floors. The two- to three-bedroom condos will range from 1,200 SF to 2,500 SF. In between the office and residential, the 52nd floor Sky Lounge amenities floor will offer residents a club lounge, a restaurant, a conference room, a library, a bar, a yoga studio and an outdoor area.

The 435k SF Class A+ office space below will provide column-free floor plates, 12.5-foot-tall ceiling heights, floor-to-ceiling curtain walls, views of the city and bay, and technological features. The office space is expected to be ready by November of next year. Over 2,400 SF of retail space will also be included. A bridge will connect the building to the 5.4-acre City Park in the Transbay Transit Center nearby. The team associated with 181 Fremont includes Arup, Level 10 Construction, residential interior designer Orlando Diaz-Azcuy, Heller Manus Architects and residential architects Hornberger + Worstell.