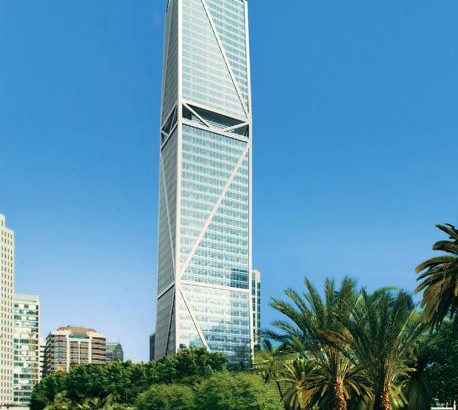 Prominent Silicon Valley builder Jay Paul Co. is making a bold move into downtown San Francisco, buying a parcel next to Transbay Terminal where the firm will erect a 700-foot speculative tower.

In an interview, CEO Jay Paul said he has acquired 181 Fremont St., which is entitled for a 52-story highrise with 404,000 square feet of office space and 74 spacious condominiums on the top 14 floors.

Paul said he would waste no time in breaking ground. RocketSpace, the co-working facility that occupies the four-story building that currently sits on the parcel, will have two to three months to move out (see accompanying story, Page 30). Its building will be demolished, and the contractor will begin excavation for the new tower. Foundation work will take about eight months. The Jay Paul Co. has committed to building on a speculative basis, meaning that construction will start before a tenant has been signed on.

“We are going to hit the ground running and are anticipating that we can offer office space in June of 2015,” Paul said. “We are used to an accelerated schedule.”

The price was not disclosed. Industry sources put it at about $75 million, with the commercial space valued at about $150 per buildable square foot and each residential unit at approximately $200,000.

Paul lives in San Francisco and his company has been based in the city for the past 17 years, but its focus has always been farther south down the Peninsula. He said his company closely monitored San Francisco’s burgeoning technology cluster and has looked at several development sites.

“We have been looking for the right project in San Francisco for a while and have now found something that is compatible with what we do — which is high-quality, unique, LEED gold projects that really stand out in a crowd,” Paul said.

The seller was SKS Investments, the San Francisco-based real estate development firm that spent six years planning and winning entitlements for the project. SKS will remain involved in the project in an advisory capacity, although the details of its role are still being ironed out.

The tower, designed by Heller Manus, stands out for several reasons. It will be the only tower in the Transbay District that includes a mix of office and residential space. It will be connected to both the Transbay Terminal and its adjacent City Park via a fifth-story sky bridge, much like some buildings on Manhattan’s west side have direct access to the High Line. A two-story open-air terrace wrapping around the building on the 36th floor will serve residents with a spa, fitness center and other amenities.

“It’s a very iconic building,” said Paul. “It has unobstructed views. It’s designed for tech tenants with an exoskeleton design that allows for column-free layouts and floor-to-ceiling windows. We think there are a lot of elements in the design that make it unique.”

The contractor will be Level 10, which is a joint venture between Jay Paul and a group of former Rudolph and Sletten executives.

Jay Paul and SKS representatives met on March 25 with Mayor Ed Lee to announce the deal and to ask for the city’s cooperation in expediting building permitting. Paul said Mayor Lee “has been exceptional in terms of making businesses welcome to the city.” Lee said Jay Paul’s entry into the Transbay District was proof that the future Transbay Transit Center would be “a critical anchor for economic development and jobs.”

“(The Transbay) was a bet that the future would be about cities, great transit access, innovation and dynamic mixed-use urban centers,” Lee said. “I think it’s safe to say that our bet was right.”

Todd Rufo, director of economic development for the city, said that the project would create 600 construction jobs and enough space to house 1,700 workers.

“It signifies the strength of investor confidence in San Francisco,” Rufo said.

“I think Jay Paul will bring a breath of fresh air — he has been visionary for decades,” Kingsley said. “Jay Paul’s investment here speaks volumes about San Francisco’s role in the regional economy.”