San Francisco’s 181 Fremont To use elevators for fire evacuation 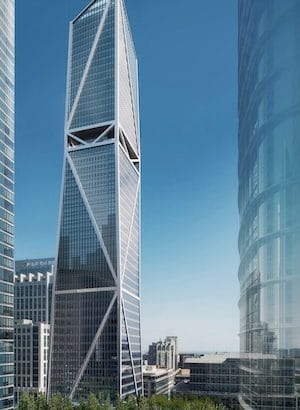 In a U.S. first, a high-rise, when completed by the end of next year, will  contain an elevator system that operates during fires to evacuate occupants. California’s Occupational Health and Standards Board granted a variance recently for the evacuation system in 181 Fremont, an  office-residential tower in San Francisco on its way to a height of 802 ft.

The 2009 edition of the International Building Code requires a third stairwell in new buildings 420 ft or taller, unless they have an occupant evacuation operation. OEO is a life-safety system that allows  elevators to be used by occupants in fires.

The premium for full elevator evacuation at the 700,000-sq-ft 181 Fremont is about $3 million, says Heller. The up-charge will be offset by the gain in square footage, plus there will be increased safety, he adds.

Elevators, designed to run during an earthquake, will be used for evacuation, firefighting and rescue. Shafts and lobbies are designed to halt fire, smoke and water infiltration, says Jeffrey Maddox, a principal with Fire Consultants Inc. The hoist way has been hardened against impact.

Hampton says 181 Fremont is TK’s first OEO job. But he expects it won’t be the last, predicting that demand will be growing.