Upstaged and overshadowed by Salesforce Tower, its taller and more famous neighbor to the north, the mixed-use skyscraper at 181 Fremont St. will forever be the second banana of the Transbay Transit District.

But if Thursday night was any indication, whatever the 802-foot building may lack in height is easily made up for in terms of sex-appeal and social cache.

More than 500 folks turned out to celebrate the opening of the Fremont Street tower, a mixed-use skyscraper with distinctive diagonal exoskeletal beams that was a decade in the planning. A plush black carpet was rolled out on the sidewalk. A brass band welcomed guests. Magnums of Veuve Clicquot were sabered. There were rooms dedicated to chocolate tasting and whiskey sampling.

“Buildings like this only come around maybe once a decade,” said real estate marketer Alan Mark, whose firm is handling sales of the tower’s condos.

In a neighborhood where glass towers are either residential or office space, 181 Fremont is both. The first 34 floors of the skinny tower will be home to Facebook-owned Instagram — employees of the photo-sharing network already have started to move into floors 25 through 28. The top 16 floors — a dramatic “skybridge” separates the two parts of the building — will be condos. 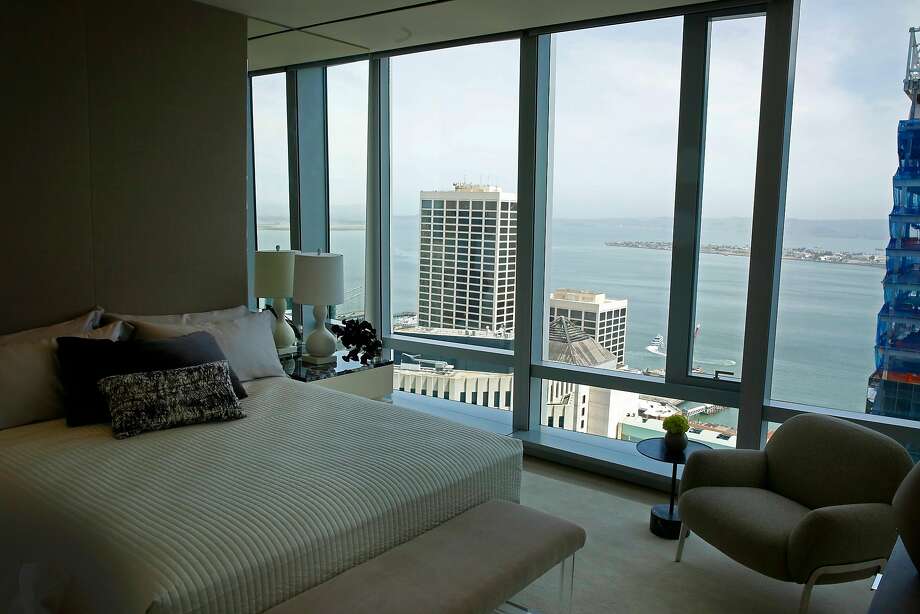 A bedroom in the model home at the 181 Fremont Residences has sweeping views of the bay. Photo: Michael Macor

For the developer, the Jay Paul Co., 181 Fremont provided a dramatic entrance into a San Francisco market. For decades, billionaire Jay Paul was Mr. Silicon Valley, builder of low-slung suburban campuses for companies like Hewlett-Packard and Microsoft. But as the heart of the Bay Area’s tech engine drifted north — Uber, Twitter, Airbnb, Square, Salesforce and Dropbox are all headquartered in San Francisco — the Jay Paul Co. figured it had better set up shop in the city as well.

And the move seems to be paying off. With Facebook paying top-of-the-market rents for the bulk of the building — more than $90 per square foot — Jay Paul is focused on selling the 55 condos that start at $3.2 million for a two-bedroom and go all the way to $42 million for a 7,000-square-foot penthouse. There are also 16 companion units — studio apartments starting at $1.2 million, that are only available to buyers of the larger residences.

The companion units are selling as fast as the big ones.

Jay Paul is not commenting on how sales are going, except to say that they are “exceeding expectations.”

Broker Greg Lynn of Sotheby’s said he has five clients who are in escrow on units. He estimates that the building is probably 40 to 50 percent sold.

“It’s the smallest and most sophisticated building downtown, with some of the best views,” said Lynn. “They are offering interiors unlike anything we have seen here in San Francisco — the level of stone in the bathroom, the cabinetry in the kitchen, the electric shades … so much thought when into these units.” 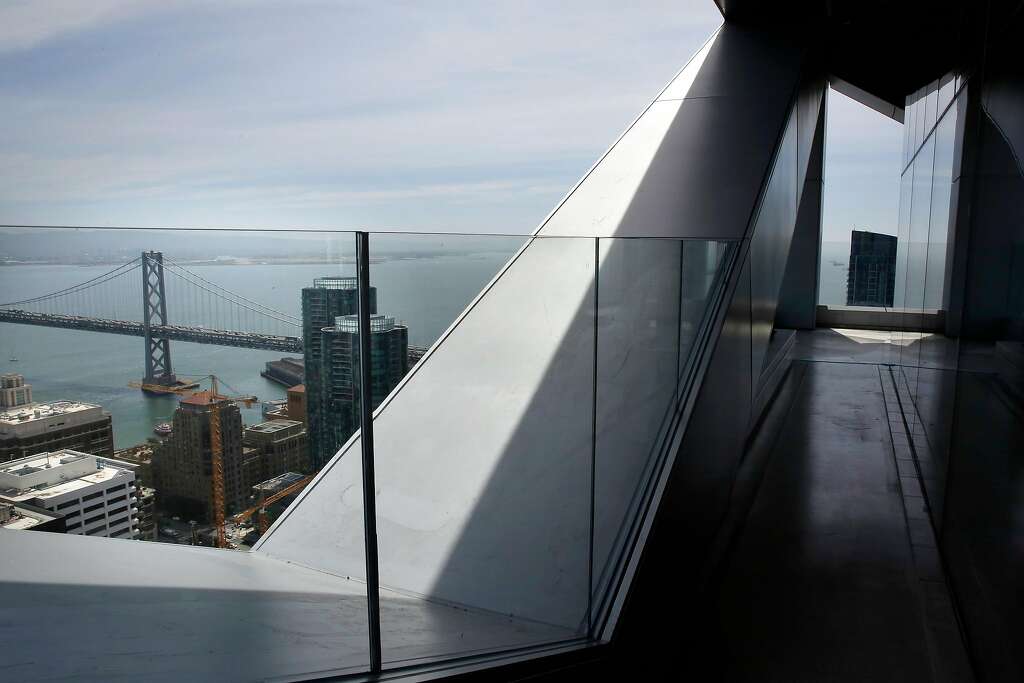 The Sky Lounge, located on the 39th floor of the building, looking out to the south east. Photo: Michael Macor

The majority of buyers are from the Bay Area, Lituchy said. There are “early adopters” who already own units in residential towers like the Four Seasons, the St. Regis and the famously sinking Millennial Tower, an excellent view of which can be had from 181 Fremont. There are empty-nesters from Atherton and Menlo Park. And about 20 percent of buyers are from elsewhere — Los Angeles, New York, Hong Kong, Shanghai.

“It’s not like New York or London, where you are getting the Russian oligarchs. San Francisco is becoming a global city but we are not there yet. Maybe some day it will be.”

None of the 55 units are affordable — Jay Paul Co. struck a deal with the city to pay $13.85 million to avoid including 11 below-market-rate condominiums.

Jay Paul is an art collector, and the building has paintings by such artists as Man Ray, Kim Gordon (of Sonic Youth), Michael Heizer and Ed Ruscha.

For the 500 or so folks who flocked to the building Thursday, the party felt like one of those evenings that someday will likely be evoked as a peak moment of San Francisco’s tech-fueled gilded age, a period of extreme wealth creation that has been in full swing for five years but shows little sign of slowing down. 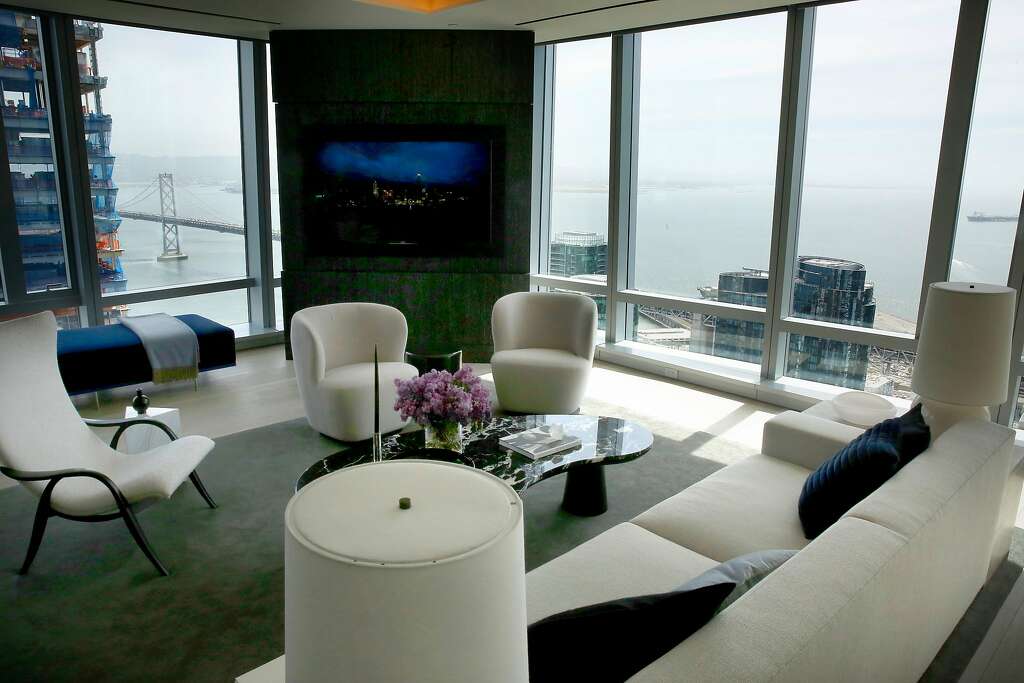 The living room in the model residence at the skyscraper. Photo: Michael Macor

“We wanted to have the higher heights back in the ’80s, but for political reasons we were limited to 500 feet,” he said. Planners eventually overcame the opposition of many city residents to tall towers by proposing to use the additional revenue from the buildings to pay for the new Transbay Transit Center.

For project architect Jeffrey Heller, 181 Fremont capped a 40-year career in San Francisco. He called the tower “the best project I have ever done — hands down.”

He arrived in San Francisco as the Bank of America building, at 555 California St., and the Transamerica Pyramid were being completed.

“The tall building in San Francisco stopped after that, and didn’t happen again until now with the Transbay District,” he said. “This was my first opportunity to do a distinctive, international-style building of significant height.”