Then there was light: Gasp-inducing MCASD campus in La Jolla set for grand reopening

At this point, Kathryn Kanjo is used to the gasps.

Walking through the newly renovated Museum of Contemporary Art San Diego (MCASD) in La Jolla, the David C. Copley director and CEO of the museum says the oohs and aahs have been consistent to anyone who has been lucky enough to tour the space before it reopens to the public on Saturday.

“It really is a lot to take in,” says Kanjo. MCASD’s flagship location has been around since 1916 and has served as a museum since 1941. The reopening has the distinction of being both highly anticipated and something of a symbolic intimation of the return of public art exhibitions in general. For nearly two-and-a-half of the five years the La Jolla location was closed, locals — nay, the world — wrestled with an ever-changing pandemic. Museums were closed indefinitely. Long-planned exhibitions were postponed or moved online, if at all.

It’s tempting to see some sort of kismet at play in the fact that MCASD is reopening just as the world itself attempts to reopen. And whether it’s the stunning, expanded building or the art itself (some of which has never been viewed by the public before), there will be plenty to see when the La Jolla institution finally reopens its doors.

Our eyes are ready. 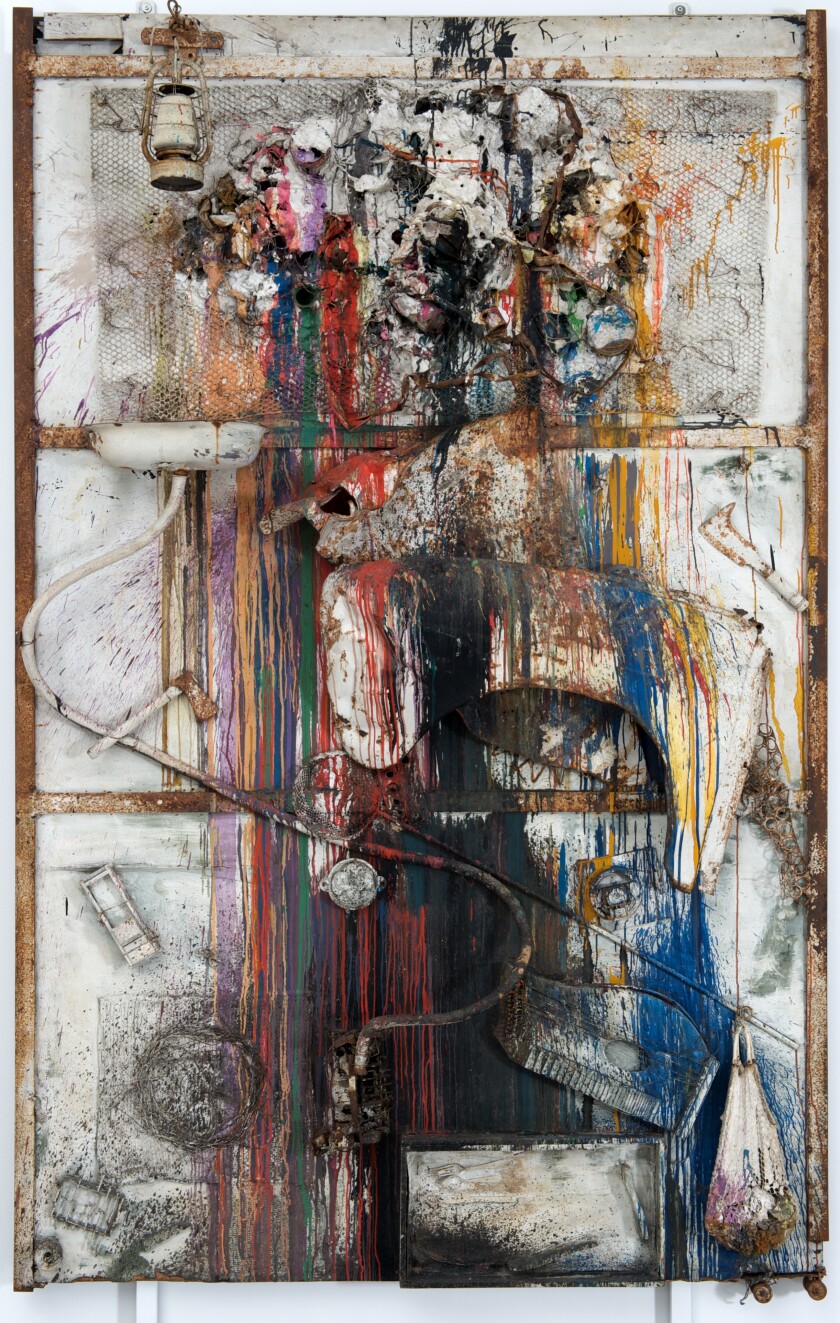 MCASD La Jolla’s first major exhibition marking its grand opening is, of sorts, a historic tribute to a legendary local. “Niki de Saint Phalle in the 1960s” examines the French-American artist’s early work throughout her 30s.

Saint Phalle is best known for the iconic, larger-than-life sculptures she largely created later in her career, but the new exhibition examines the more experimental work she produced as part of the Nouveau Réalisme movement in Paris. Among contemporaries such as Jean Tinguely, Yves Klein and later inspired by peers like Marcel Duchamp and Salvador Dalí, Saint Phalle produced some of her most important work in this time including her “Tirs” paintings (also known as the “shooting” paintings) and her “Nanas” sculptures.

“It’s extraordinary to see all these objects all together,” says MCASD Senior Curator Jill Dawsey, who co-curated the Saint Phalle exhibition alongside The Menil Collection in Houston. “We opened this show in Houston back in September, and it felt like a miracle that we were able to successfully mount an exhibition like this during the pandemic.” Even locals who may not know the name Niki de Saint Phalle are still likely familiar with her work. The artist moved to San Diego in the mid-1990s, where she remained until her death in 2002. Her recognizable, child-friendly sculptures are peppered throughout San Diego County, from Kit Carson Park in Escondido to the mosaic alligator in front of the Mingei Museum in Balboa Park. Her “Sun God” sculpture at UC San Diego, part of the university’s Stuart Collection of public art, is considered by many to be the college’s unofficial mascot.

“San Diegans, and people in the U.S. in general, may know her more for her later works of fantastical public art,” says Dawsey, pointing out a table of collected ephemera that includes early art reviews and magazine covers that Saint Phalle appeared on as a model. “We were very eager to tell more of a backstory on how she became this artist who wanted to make work for everyone, especially children.” 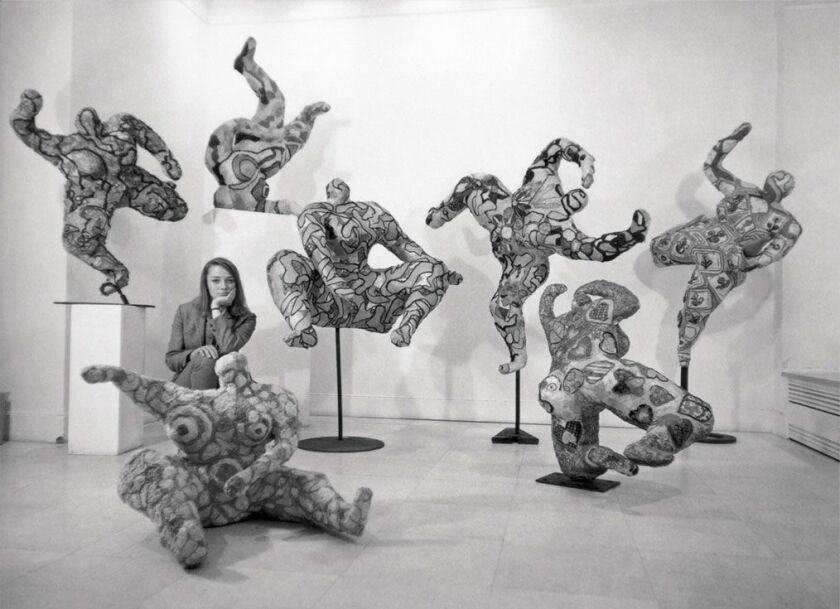 MCASD’s “Niki de Saint Phalle in the 1960s” checks a lot of proverbial boxes. First, it’s the first major survey of Saint Phalle’s work, 93 pieces in all, in what was likely the most informative time in her artistic career.

“This is a show that tells the story of this very generative, prolific and experimental decade in Niki de Saint Phalle’s life,” says Dawsey, who adds that many of the pieces in the collection were borrowed from European collections and are being displayed in the U.S. for the first time. “Much of that work was made in Europe and is still there, so in order to mount an exhibition like this, we had to travel and do a lot of research.”

Secondly, and perhaps more importantly, while many of Saint Phalle’s male contemporaries went on to greater acclaim, MCASD’s exhibition attempts to correct this slight by examining her groundbreaking forays in performance and participatory art. 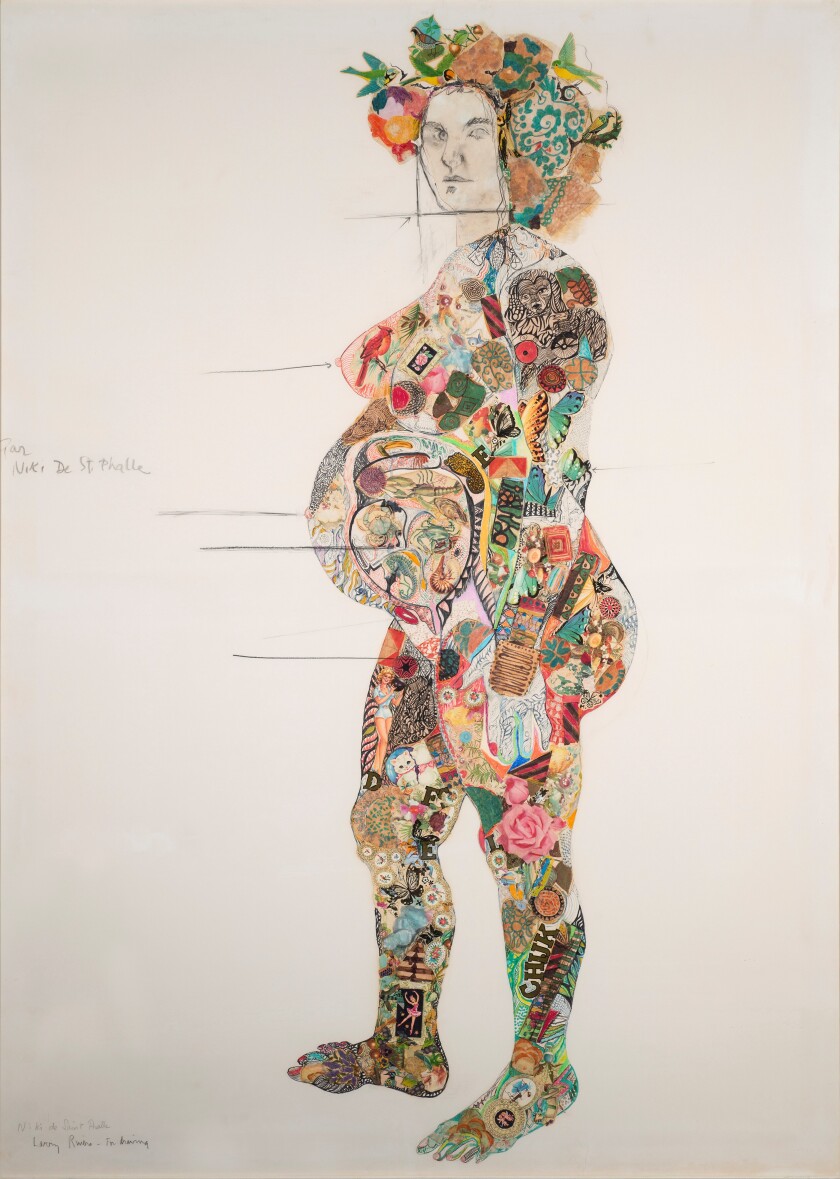 “Her contributions to art history aren’t recognized,” says Dawsey. “On the one hand, she has this very dramatic biography and that’s often the story that’s told about her, especially in Europe. So when we started to talk about Saint Phalle, we were really talking about telling a different story; to really have a historical reassessment of her work so that we talk about her the same way we talk about someone like Jasper Johns and not just in terms of her as a fashion model.”

Saint Phalle worked within the Nouveau Réalisme movement around this time, producing participatory masterpieces like “Saint Sébastien (Portrait of My Lover / Portrait of My Beloved / Martyr nécessaire),” and the pieces in the new MCASD exhibition are representative of her important contributions to the art world at this time. And with the sculptural work on display — pieces such as “Clarice Again,” the suspended-from-the-roof “Samuela II/Nana” and the masterful “Madame, ou Nana verte au sac noir” — viewers will easily get a sense of the early inspirations that went on to inform the works the artist produced in San Diego.

“People have a picture of her, a very stylized idea of her,” Dawsey says. “So I hope they come and be surprised by this show.” 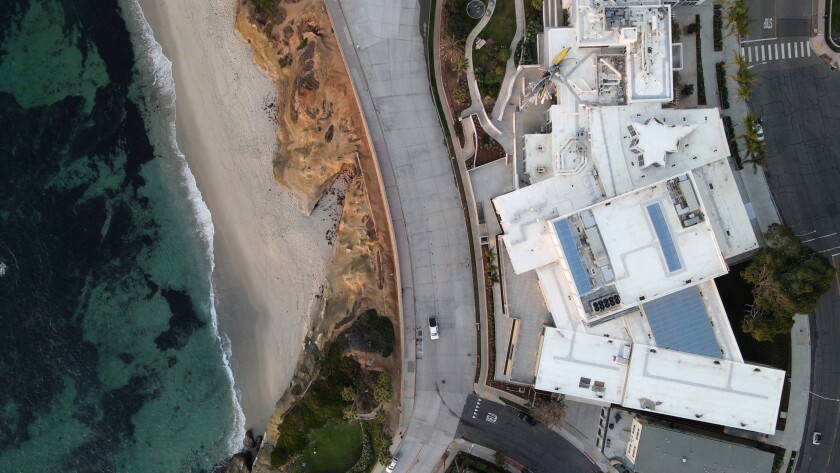 One of the first digital renderings of the outside of the Museum of Contemporary Art San Diego renovation, released more than four years ago, was a “sea-gull’s-eye view” of the building, a clever take on the standard bird’s-eye perspective. Those walking up to the expanded MCASD building, be it via Coast Boulevard below or from the front entrance on Prospect Street, will immediately notice where the $105 million dollars went.

Designed and executed by New York-based firm Selldorf Architects, the exterior sports an almost tridactic mix of concrete, glass and Italian travertine tiles in the back and a more glass-and-tile-heavy front. In addition to doubling the square footage of the museum, Selldorf Architects quadrupled the museum’s existing gallery space. The also now includes a public park that includes sculptures from the permanent collection. Inside, the museum appears to blend seamlessly with the surrounding coast, its many windows and terraces giving a sense of the art working within nature, a one-of-a-kind integration.

“Our goal for the museum was to allow the fantastic site and views of the Pacific Ocean to guide a coherent circulation path and instill a generous and inclusive spirit to bring people to the great collection of MCASD,” said architect Annabelle Selldorf in an email statement. That path, however, is suitably and pleasantly opaque. At the original Irving Gill-designed La Jolla space, and as is the case with the downtown MCASD location, the patron experience was much more unambiguous. The redesigned MCASD La Jolla sports a massive, welcoming front entrance area and lobby, but where patrons go from there is much less clear. Head north and they’ll find themselves in the Axline Court area. South leads to the Strauss galleries where two levels of rooms house some of MCASD’s permanent collection. They can drift from gallery to gallery and never feel as if they’re confused or lost.

What’s more, many of the galleries sport massive ceilings, many as high as 16 feet, and windows that look out to the coast, making the experience something of a surrealist masterpiece. Come on a cloudy day and a visitor may have an entirely different experience than coming when the sun is out.

“This is such a spectacular location,” Selldorf says. “We want visitors to have a sense of connection to the site so we strategically placed windows to frame views and added terraces and the public Art Park. The new addition is integrated with the existing buildings to create a more cohesive whole that welcomes people to enjoy the incredible collection.” 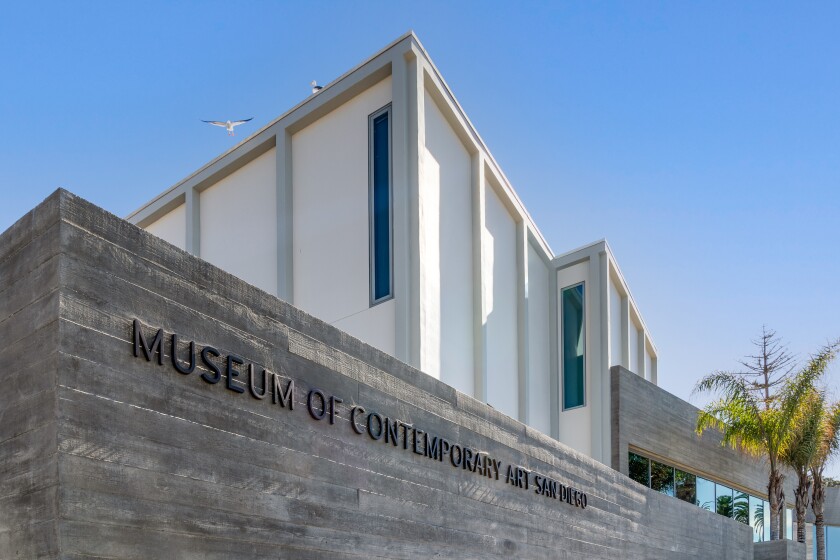 ‘A museum that’s about our place’

Walking around that “incredible collection” with Kanjo, it’s easy to notice she’s still in awe of just how well the new design of the museum complements the art in the galleries.

“It’s wild. I mean, this was such a long time coming” says Kanjo, who has served as MCASD’s director since 2016. 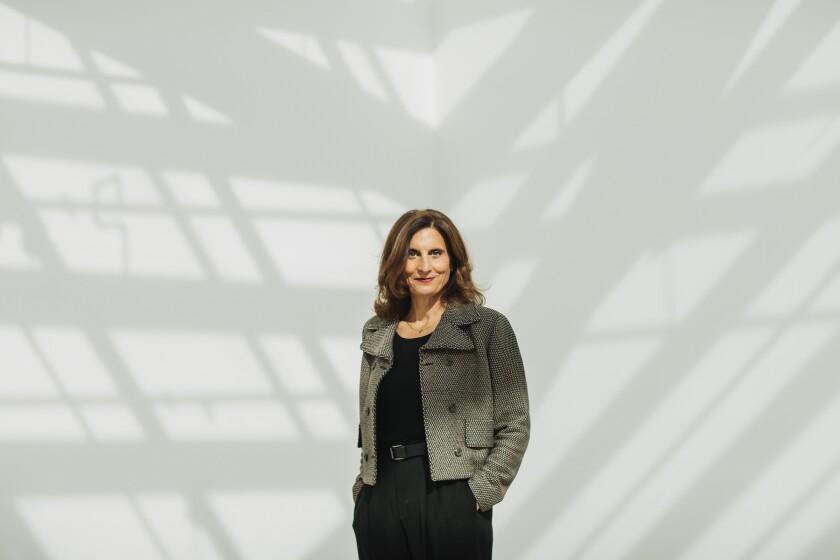 Kathryn Kanjo, CEO of the Museum of Contemporary Art San Diego. (Stacy Keck)
Back in 2020, as construction on the new building persisted despite new pandemic restrictions, Kanjo referred to the museum’s eventual transformation as that of a “jewel-box-sized gallery space” turning into a “true museum.” Nearly two years later, it’s easy to see what she meant by that statement. Of the more that 5,600 works in MCASD’s permanent holdings, 203 pieces will be on display in “Selections From the Collection,” a new exhibition that features modern masterpieces that date back to the 1960s when the museum first started acquiring works.

“It’s easy to get lost among it all, but you always feel like you know where you’re going,” said Kanjo, who personally organized the exhibition with help from MCASD associate coordinator Anthony Graham.

The exhibition includes household names such as Ed Ruscha, Mark Rothko and Andy Warhol, but also includes modern masterpieces by Ai Weiwei, Yoshitomo Nara and Jay Lynn Gomez. Some of the pieces, such as the large Yayoi Kusama sculpture (“Dreaming Pumpkin”) that greets patrons near the entrance of the galleries, will be on view for the first time ever. And while the current iteration of “Selections” will be up for a year, it is a permanent exhibition and Kanjo plans to occasionally swap out pieces for others in the museum’s collection.

But what may be the most impressive (and if we’re being honest here, it’s all very impressive) is just how many local and regional artists there are on the walls. Yes, there are legends of the local scene on display such as Miriam Schapiro, Robert Irwin and John Baldessari, but the galleries include dozens of names from the San Diego and Tijuana art world, including Manny Farber, Victor Ochoa and Marcos Ramírez ERRE, as well as more recent notable names such as Sadie Barnette, Mely Barragán and Andrea Chung. 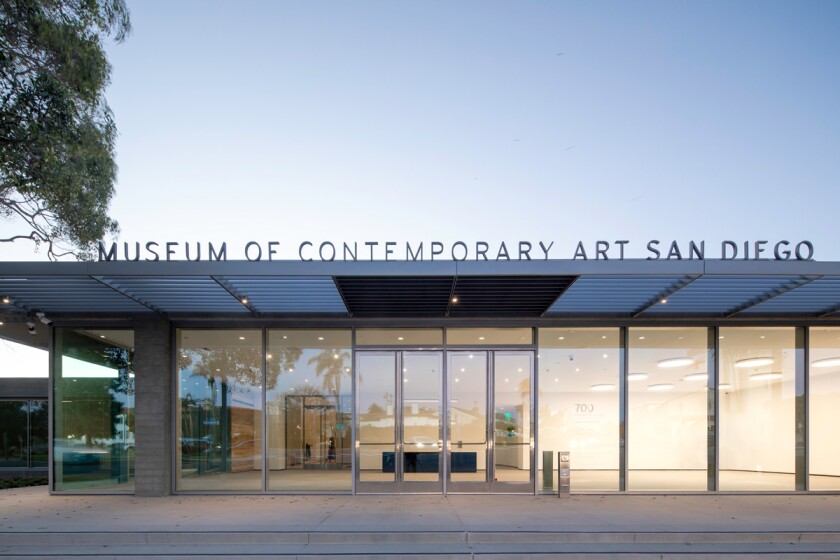 “I think the thing is when it comes to the artists from our region, we’re very much a museum that’s about our place,” Kanjo says. “So you’re seeing the physical site, but you’re also seeing the cultural history. You see the influences of places like UCSD and the legacy of artists who were committed to California. I think we’ve always been adventurous as a collecting and exhibiting institution, working against the grain.”

Kanjo says she and Graham took both a “chronological” and “thematic” curatorial approach to the works and galleries, ostensibly beginning and ending with pieces from the 1960s and ’70s, creating something of a bookend-type feel with more contemporary works splashed throughout. Harmonious as it is among the building’s high ceilings, state-of-the-art vents and concrete floors, the sheer amount of history and consequence within the galleries is, indeed, a “gift” to San Diego.

“This moment is about the future, but it’s also about our history,” Kanjo says. “There’s so much to see that you’ll have to come back.”