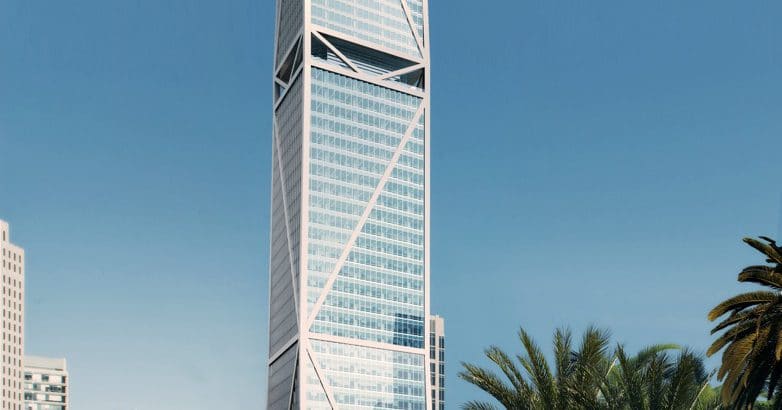 A new skyscraper in San Francisco tops off this month, rising 70 stories over the city’s financial center. Upon completion in 2017, 181 Fremont will be the tallest residential tower west of the Mississippi River — and possibly the most lavish and exclusive.

Renowned designer Orlando Diaz-Azcuy and architectural firm Heller Manus Architects set out to make the building the epitome of luxury. The $665 million tower spares no expense, from the gold-plated door handles to the hovering walls.

“The vision for 181 Fremont is not simply to raise the bar for luxury living in San Francisco, but to set an entirely new one,” according to a brochure for interested buyers. It also happens to be one of the most expensive. The building’s 55 ultra-luxe condos start at $2,400 per square foot, more than double the city’s median home average.

No two units in 181 Fremont are exactly alike, in part because the building tiers toward the top. The layout changes from one apartment to the next to maximize space.

181 Fremont wil be the only residence with direct access to the new Transbay Transit Center. It will connect eight Bay Area counties through 11 transportation systems.

The developers of 181 Fremont call the building an “engineering marvel.” An aluminum-based exoskeleton twists around the building to provide added support. During an earthquake, the tower’s criss-crossing joints will behave like shock absorbers, reducing stress from seismic activity, according to Matt Lituchy. Lituchy calls 181 Fremont the most “resilient” building on the West Coast. In the event of a major earthquake, residential and commercial tenants could resume complete access within one month, according to the building’s developer. Even the elevator systems are designed for continuous operation during a catastrophic event, which is useful when you’re located 800 feet up.